The Pictish Room, housed in the Aberlemno Village Hall, is run by local volunteers and is open one day a month from April-October and by arrangement. The full programme of open days for 2023 will be published in due course.

The Pictish Room is home to a collection of Pictish replica stones, carvings and interpretation boards that celebrate our diverse Pictish heritage. It is located in the Village Hall, adjacent to the celebrated Aberlemno Sculptured Stones and a short walk from the famous Cross Slab which is in the Aberlemno Churchyard.

Norman Atkinson OBE, well known locally for his knowledge, particularly but not restricted to the Picts, has led a number of walks around the Aberlemno Carved Stones and John Borland has given talks on images of Warriors and War on Pictish Stones. John’s background is as a survey manager and illustrator with RCAHMS (now HES) and he is Chairman of the Pictish Arts Society.

A great time was had by all at the last Pictish Room open day which was supported by Shiltron of Fortriu. A few photos of the day are shown below courtesy of Mark Hooghiemstra.

The Angus Doors Open Days programme is online both at www.visitangus.com/doorsopen and on the national website at www.doorsopendays.org.uk.

Please do feel free to contact us to arrange for private access to view the exhibits on alternative dates.

In Aberlemno, there are three roadside stones, two of which bear symbols only, the better one with fine snake, double-disc and z-rod, mirror and comb symbols. The third stone is a Pictish cross slab with a ring cross on the front and a particularly good hunting scene on the back.

The cross-slab in the Kirkyard, one of the finest Dark Age sculptures in Europe, stands on the west side of the church. The front has an impressive cross and the beautiful decoration is heavily inspired by Northumbrian art of the late 7th/early 8th centuries. The reverse has a magnificent battle scene which is thought to portray the battle of Dun Nechtan or Nectansmere of 685 AD when Brude MacBeli defeated the Northumbrian King Ecgfrith and his army.

The slab ably depicts Pictish and Northumbrian cavalry, Pictish infantry and a dying Northumbrian being pecked by a Raven.

The Aberlemno Pictish Stones, incorporating the Pictish Room, have been included as a location in the Hidden Gems category in the brand new ‘Insider’s Guide to Angus’.

There was a recent campaign on Visit Angus inviting residents and past visitors to Angus to tell them about their favourite places in Angus across ten different categories.

They have used this information to create an ‘Insider’s Guide to Angus’ which will be featured on visitangus.com. In addition, they will be producing a number of new blog pieces and will be promoting this on the Visit Angus social channels. We hope this will create a buzz around Angus and encourage people to visit us so they can experience these places for themselves." 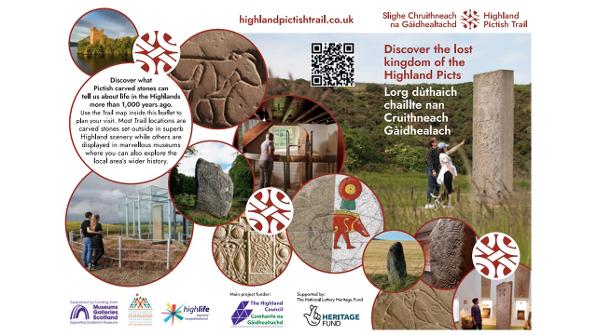 Angus is acknowledged as one of the key centres of Pictish life in the first millenium, thanks to the relative wealth of archaeological evidence found locally. In particular, a large number of Pictish stones have been found in Angus which are famed for the remarkable quality of their carvings. Meigle and St Vigeans are both home to important collections of Pictish stones, while a cross slab from the village of Aberlemno is considered one of the finest early medieval stone carvings in Europe.

It is also widely believed that the Battle of Dunnichen took place on and around Dunnichen Hill, just outside the Angus village of Letham. This battle is one of the most important dates in Scottish history, as the Pictish victory finally halted Northumbrian expansion in Scotland and created the foundations for Scotland as we know it to eventually form.

The Angus Pictish Trail Guide provides an informative guide to many of the key Pictish sites in Angus. This leaflet can be downloaded here: Pictish Trail Leaflet.

Archaeologists have uncovered a Pictish symbol stone close to the location of one of the most significant carved stone monuments ever uncovered in Scotland. The team from the University of Aberdeen hit upon the 1.7metre-long stone in a farmer’s field while conducting geophysical surveys to try and build a greater understanding of the important Pictish landscape of Aberlemno, near Forfar.

Aberlemno is already well known for its Pictish heritage thanks to its collection of unique Pictish standing stones the most famous of which is a cross-slab thought to depict scenes from a battle of vital importance to the creation of what would become Scotland - the Battle of Nechtansmere.

The archaeologists were conducting geophysics surveys of the ground early in 2020 in an effort to better understand the history of the existing stones as part of the Leverhulme Trust funded Comparative Kingship project. Taking imaging equipment over the ground, they found anomalies which looked like evidence of a settlement. A small test pit was dug to try and establish whether the remains of any buildings might be present but to their surprise, the archaeologists came straight down onto a carved Pictish symbol stone, one of only around 200 known. Their efforts to establish the character of the stone and settlement were hindered by subsequent Covid lockdowns and it was several months before they were able to return to verify their find.

The team think the stone dates to around the fifth or sixth century and, over the last few weeks, they have painstakingly excavated part of the settlement and removed it from its resting place - finding out more about the stone and its setting.

Professor Gordon Noble who leads the project says stumbling upon a stone as part of an archaeological dig is very unusual. “Here at the University of Aberdeen we’ve been leading Pictish research for the last decade but none of us have ever found a symbol stone before,” he said. “There are only around 200 of these monuments known. They are occasionally dug up by farmers ploughing fields or during the course of road building but by the time we get to analyse them, much of what surrounds them has already been disturbed. “To come across something like this while digging one small test pit is absolutely remarkable and none of us could quite believe our luck. “The benefits of making a find in this way are that we can do much more detailed work in regard to the context. We can examine and date the layers underneath it and extract much more detailed information without losing vital evidence.”

Research fellow Dr James O’Driscoll who initially discovered the stone describes the excitement: “We thought we’d just uncover a little bit more before we headed off for the day. We suddenly saw a symbol. There was lots of screaming. Then we found more symbols and there was more screaming and a little bit of crying! “It’s a feeling that I’ll probably never have again on an archaeological site. It’s a find of that scale.”

Like the other stones at Aberlemno, the new discovery appears to be intricately carved with evidence of classic abstract Pictish symbols including triple ovals, a comb and mirror, a crescent and V rod and double discs. Unusually the stone appears to show different periods of carving with symbols overlying one another.

The stone has now been moved to Graciela Ainsworth conservation lab in Edinburgh where more detailed analysis will take place.

Professor Noble hopes that it could make a significant contribution to understanding the significance of Aberlemno to the Picts. “The stone was found built into the paving of a huge building from the 11th or 12th century. The paving included the Pictish stones and examples of Bronze Age rock art. Excitingly the 11th-12th century building appears to be built directly on top of settlement layers extending back to the Pictish period” he added. “The cross-slab that stands in the nearby church at Aberlemno has long been thought to depict King Bridei Mac Bili’s defeat of the Anglo Saxon King Ecgfrith in 685, which halted the expansion of the Anglo-Saxon kingdoms to the north. “The settlement of Dunnichen, from which the battle is thought to have taken its name, is just a few miles from Aberlemno. In recent years scholars have suggested another potential battle site in Strathspey, but the sheer number of Pictish stones from Aberlemno certainly suggests the Aberlemno environs was a hugely important landscape to the Picts. “The discovery of this new Pictish symbol stone and evidence that this site was occupied over such a long period will offer new insights into this significant period in the history of Scotland as well as helping us to better understand how and why this part of Angus became a key Pictish landscape and latterly an integral part of the kingdoms of Alba and Scotland.”

The project has had help from Aberdeenshire Council Archaeology Service and the Pictish Arts Society to get the stone lifted and to the conservation lab, with radiocarbon dating funded by Historic Environment Scotland. Bruce Mann, Aberdeenshire Council Archaeologist, said: “We have been providing a service to Angus Council for many years and I can say this is one of the most important discoveries made in the area in the last thirty years. To find prehistoric rock art re-used in the floor of this building would be exciting in its own right, but to have the Pictish symbol stone as well is just amazing.”

Researchers will now be working with the Pictish Arts Society to develop a fundraising campaign for the conservation and display of the stone.

For more information about this site please contact us